Under the bow, string flexibility feeling gives a comfortable ease of play, while offering the required string resistance under the fingers. The perfectly adjusted string stiffness meets the requirements for a swift response, facilitates a large range of nuances within the expanded color spectrum, and perfect sound emission from pianissimo to fortissimo.

The homogeneity of these strings is present when passing from one string to another: sound volume regularity, density and harmonics, are present from the low positions to the highest positions throughout the entire length of the fingerboard. The Corelli SOLEA game is handmade in FRANCE.

The wound A, D and G strings are made of new materials: a combination of very new innovative metals. The double layers of innovative raw materials surround a synthetic multifilament core (specific polymer) whose elasticity and density have been designed to give a rich and bright sound rendering.

Tried these strings out and had to double check the packaging. They felt very stiff. As if I were playing on high tensioned strings. Not a thicker gauge but rather a string which feels a bit more firmer under the finger and requires a bit more effort to play.

I've had them on about a week. I'm hoping the they will loosen in time. For now, getting accustomed to the tension will take some time.

UPDATE: No luck. Strings are still stiff and overtones/undertones died out fairly quickly. Maybe within a month of playing. They now feel like I'm playing on dead high tensioned strings. Requiring more effort to get that oomph needed. Regardless, still doesn't feel like a medium tension string. 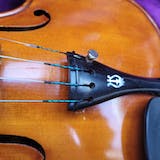 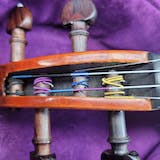 These strings are nice, full and rich sounding. I especially like their quick and easy response. It is necessary to avoid too much bow pressure with them as they can easily sound choked.