Magnacore® Arioso is now available as a full set!

A and D strings have been developed to suit the needs of professional musicians in search of a pure and ‘singing sound’. Produced in medium tension, these strings combine brilliance and projection with a wide range of sound colors. The Magnacore® Arioso G and C deliver a lower tension without compromising sound volume. Liberating and accentuating the A and D in your overall sound while providing an easy response and effortless playing in the lower register.

I love these strings. I previously used magnacore medium and strong, and the softness and response of the Arioso is better and I don’t miss any of the projection. I’m able to loosen my bow hair which takes some edge off the sound

I am a student player so take my review with a grain of salt. I replaced my cheap beginner instrument with a mystery no label instrument that a classical guitarist had purchased many years ago from his local music shop. He stated the shop owner where he bought it told him it’d been purchased from an old man who’s wife had passed away. The seller I bought from loved the sound of the cello, but he was much better at guitar and continued to play that until his arthritis made playing either impossible. The instrument had excellent wood on front, back and sides and the price was right and he was able to meet me for inspection of the instrument.
Upon seeing it in person I knew I couldn’t pass it up at his asking price even though the sound post had fallen and I couldn’t play it yet. I needed it for ensemble the following day and used a post setter to at least have something that day. Prior to class I asked my teacher’s impression of the instrument. He had similar concerns of the need for proper set-up, a lighter tail piece and reshaped bridge but felt it was a big improvement. He felt it was worth 10x what I paid. Comparable to the sound of advanced student instruments. He is a professional player who tours the world and holds numerous degrees including a doctorate of music. This assessment was prior to our local luthier fixing the issues that needed to be addressed. My teacher also felt new strings would help. I had less expensive Helicore and Kaplan.My teacher recommended the Magnacore instead. Once on, my cello was a different instrument! Deeper darker C and G with a sizzling growl, even across all strings without any stridency in the D or A. The strings played in quickly and have a focused sound as well as a wonderfully complex tone. This is consistent playing piano or forte. My teacher is selling his cello and feels bad what it is selling for given how close mine sounds for so much less money! The strings definitely took it up a notch. 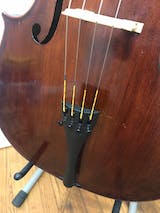 K
Kathryn V.
Worth every dollar

I first heard Larsen’s Magnacore Strings on a colleagues cello and was very impressed. I had been quite happy with Evan Pirazzi Strings on my cello but decided to give the Magnacore Strings a try just to see what difference it would make. After some research to determine if I should try the medium or Arioso tension, I went with the Arioso. My cello already projects well and has a bright, direct sound on the upper strings. I am so happy with the richer sound and the ability to get different tonal colors. I wanted to play for hours.