Quick and reliable service, and competitive pricing. Good selection, too.

This is an excellent gut string with a velvet like sound. As you play, you can feel the vibration of the string at your fingertips which makes you believe there is life in them. The fourth string has great depth and warmth of sound. I currently combine Thomastik-Infeld strings with a Hill E string. 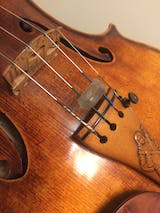 A
Anja S.
The best violin strings I have ever used!

I have used Passione strings, both regular and solo, for many years as a member of the Los Angeles Philharmonic Orchestra. I also use them in solo concertos with orchestra - no problem being heard over a full orchestra. They are the best strings I have ever used in terms of both sound quality and durability. They may never be as "bright" or "loud" as steel or synthetic strings but they will also never be ugly or shrill. Don't confuse brightness or loudness under the ear with projection. They are capable of producing the widest range of sound color, have extremely powerful projection and have lasted me up to six months of daily orchestral use. Many synthetic strings develop flat spots relatively quickly and thus go false much faster than Passiones. In comparison to other gut strings they play in much more quickly, at most a day or two, and are generally more stable than older-style gut strings. Like all gut strings Passiones will react to changes in humidity but this has never been an issue for me. Recommended for players who want the best sound with great projection and long life. I particularly like the Passione G and D. The A has not worked as well for me but that may have to do with my playing style or the violin I used them on. I find absolutely no drawbacks to these strings.

Pirastro created the Passione strings as a more stable and durable alternative to traditional gut strings. The Solo variant adds the benefit of slightly higher tension, more brightness, and considerably better projection than unwound gut strings. While they will never be as bright or loud as a steel string, such as Jargar, they make up for it in warmth. Passione strings offer the warmth of gut strings, with much of the projection of synthetic strings. The sound quality on my violin is noticeably better than with Dominants, Obligatos, or Visions. However, the benefits of incredible richness and good projection have drawbacks.

Like all gut strings, Passione Solos take much longer to set up than synthetic core strings. Where a set of Visions take 1-2 hours to set up on my violin, the Passione Solo strings took about 4-5 hours to stretch fully and settle in. This is markedly better than pure gut strings, like Chorda or Oliv, which can take days to set up properly. Another disadvantage is that the Passione Solos tend to go out of tune more quickly- especially under heavy playing in higher positions. Extended double-stop playing also tends to throw them out of tune quickly.

For accomplished students or professionals who can tolerate the haggles, Passione Solo strings are a worthwhile investment. They open range of dynamics more subtle than can be accomplished on synthetic or steel strings. They require a delicate touch when playing, as more weight does not equate to more sound. They're an excellent string with unlimited potential in skilled hands.